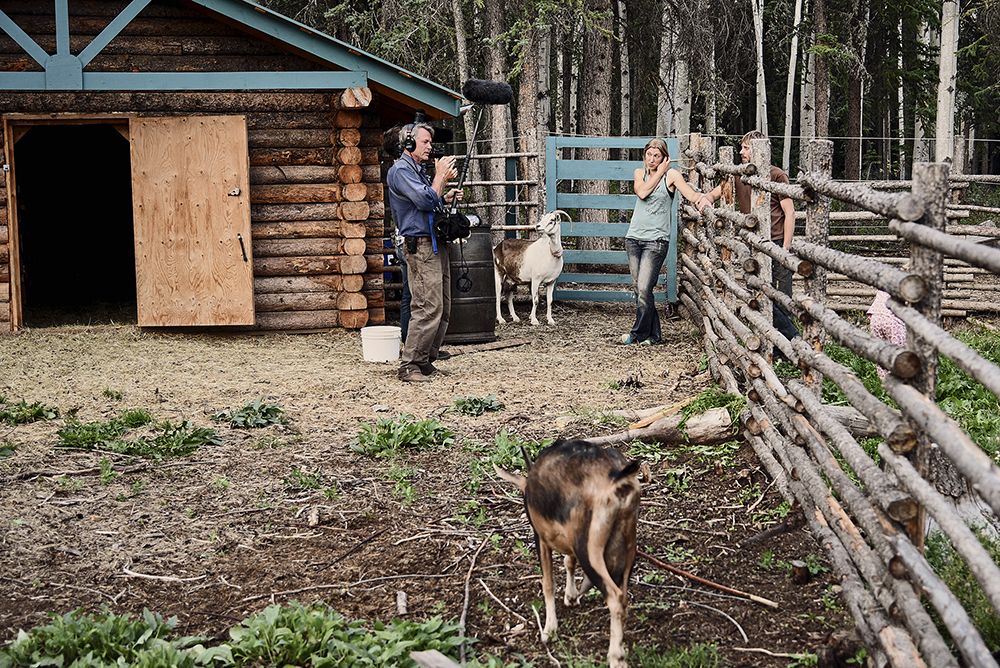 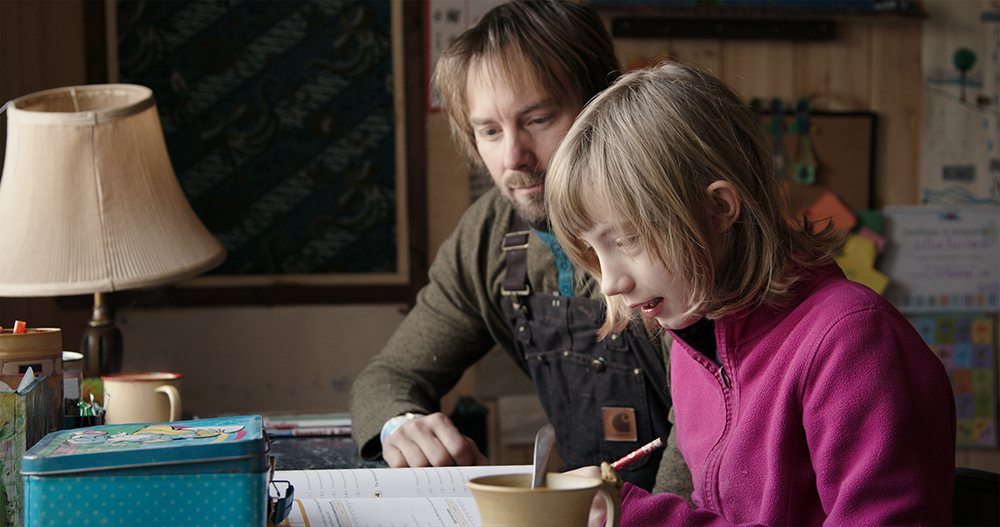 Sylvia Frisch
Sylvia is a second generation Yukoner raised to believe in keeping as close to the land as possible, for as long as possible. Sylvia lives and works in the boreal forest of central Yukon where she is a mother, birch syrup producer, and practicing permaculturalist. She hopes her home and surroundings inspire others to develop and nurture a meaningful connection to nature - a connection that could be a lifeline in these times of rapid change.

Berwyn Larson
In the Yukon Berwyn discovered a home that fulfills his love for remote natural places and a wish to live in harmony with the Boreal Forest. Living on the land allows him to hone his skills and craft as he works and shapes raw materials into shelter and food. Deep in the woods Berwyn has forged a comfortable life supported through a commitment to local food products that are affordable for the common northerner. 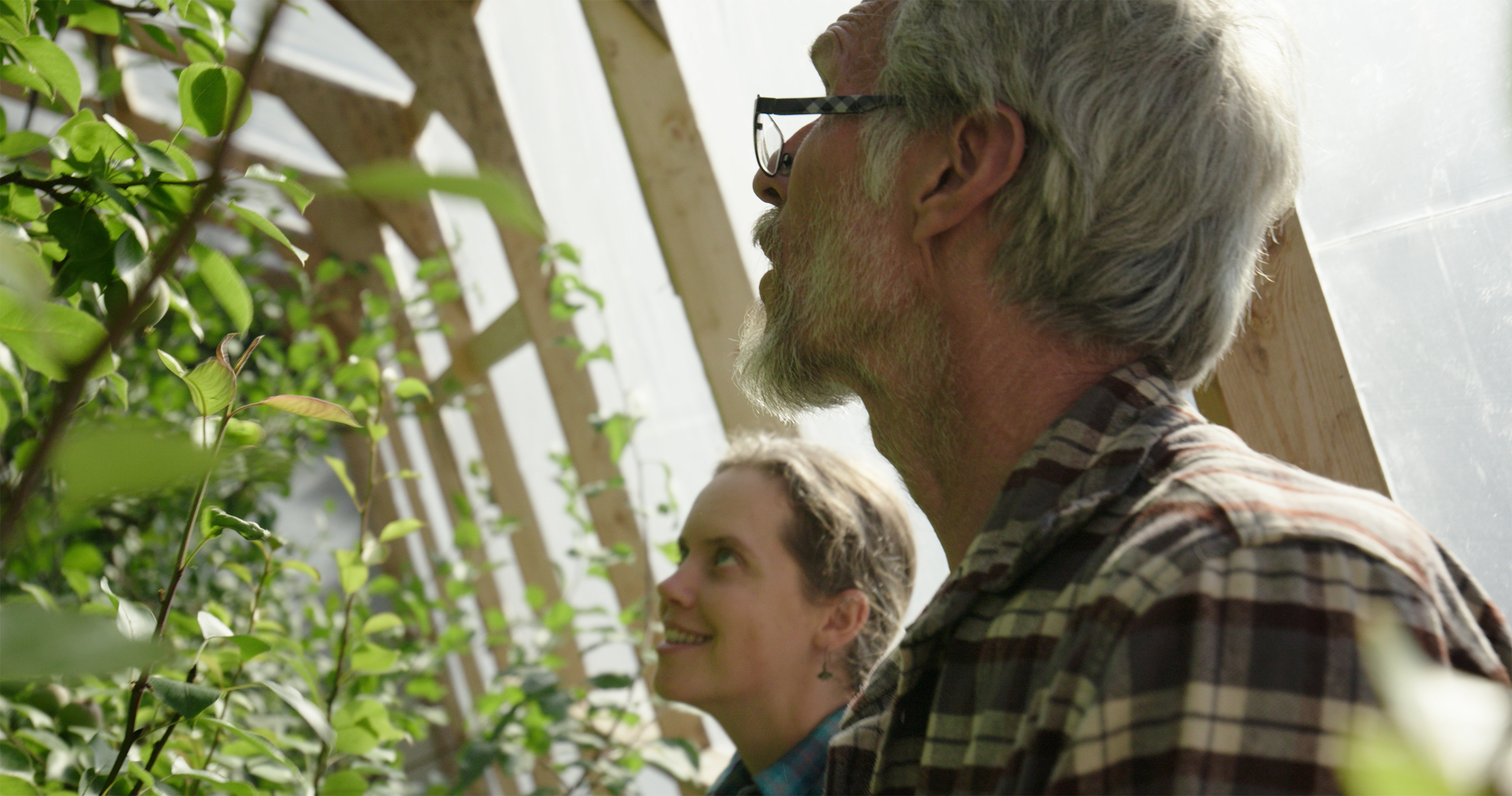 John Lenart
John is a native of the U.S. Midwest who grew his first melons at age 5. He planted his inaugural apple tree in the Klondike thirty years ago, undeterred by cold, heavy, moss-covered silty soils. Determination and passion prevailed and John has become a sought-after expert in extreme northern horticulture. He has been featured in Yukon, North of Ordinary, Up Here, What's Up Yukon and CBC television, both in the series On the Road Again and more recently in a feature interview.

Kim Melton
Kim, born in South Africa, migrated north of sixty around the same time as John. She grew up on the Canadian shield and moved to the Yukon to pursue her career as a biologist. She has shifted to a more holistic approach to life that focuses on sustainable living while allowing her to engage as a scientist and a writer. Her work has appeared in Cirque, Northern Public Affairs and What's Up Yukon. 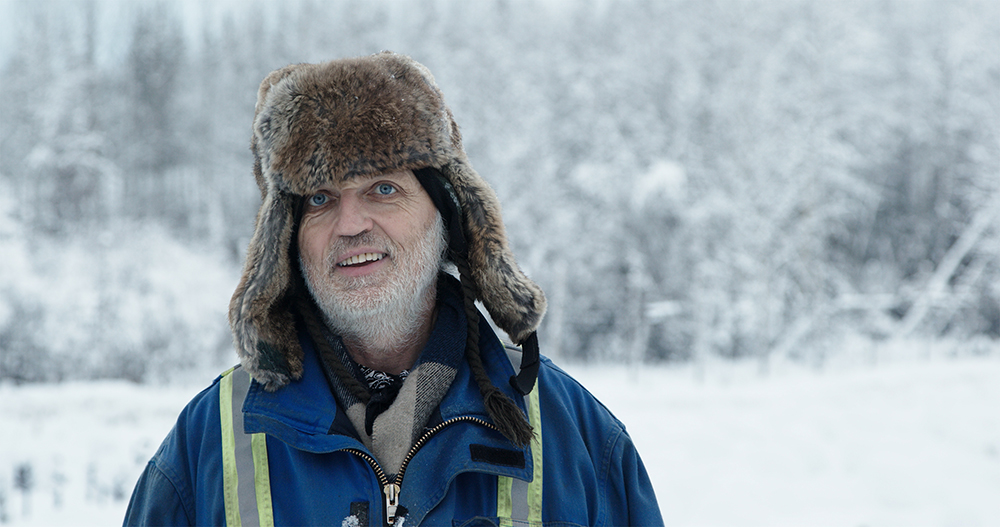 Otto Muehlbach is a third generation Horticulturalist from Germany whose passion for environmentalism, sustainable agricultural practices, local food production and love of refurbishing and modifying castoff equipment, tools and materials, inspired him to start Kokkopellie Farm in 2013. Along with his partner Conny Handwerk, Otto works year round growing and selling local produce from their off-grid homestead, located on some of the most fecund and productive soil in the Yukon. Otto is renowned in the Klondike for his creativity and resourcefulness. Using his skills as a machinist, mechanic, welder, carpenter, horticulturist and artist, Otto lives by his motto “Nothing goes to waste on a farm.” He is continually inventing practical uses for others’ castoffs and supposed ‘junk.’  Always willing to lend a hand to friends, neighbours and strangers, Otto has embraced the Yukon spirit of community and camaraderie, and extends this to everyone he meets, with maybe the exception of a certain Brussels sprout loving moose… 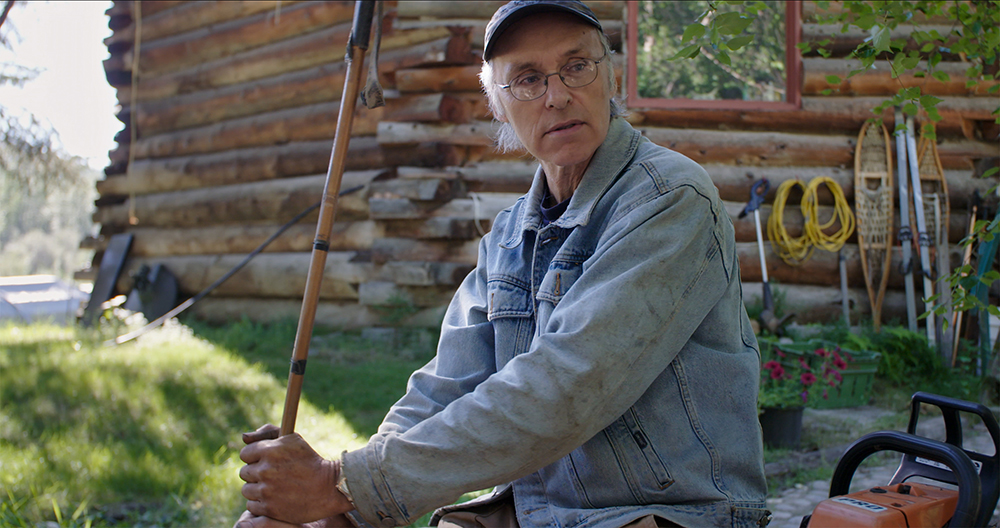 Grant Dowdell arrived in the Yukon from Toronto, Ontario in 1970.  In those early years Grant saw an opportunity to support his dream of joining the ‘Back-To-The-Land’ movement by becoming a market gardener. Dawson City’s last market garden had closed down sometime in the mid 60’s. Through perseverance, self-discipline and extremely hard work Grant eventually attained his goal and developed, owned and operated a successful business providing fresh produce to the town for 40 years. Throughout the years Grant supplemented his income by trapping and commercial fishing, while raising a family of three children in relative isolation on their off-grid island in the Yukon River, 18 km.s upriver from Dawson City. Grant’s business success and lifestyle continues to be a source of inspiration to food producers throughout the Yukon 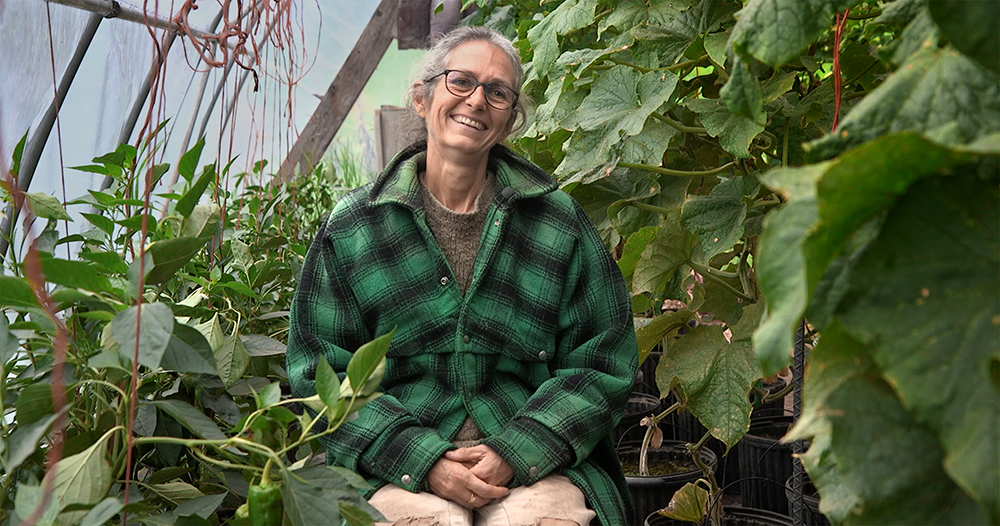 English born, Karen inherited the national passion for gardening and country life.  From her parents and grandparents she absorbed a love of the north.  She feels blessed to have been able to combine these two strong attractions, weaving a life of wandering northern trails and rivers before settling to farm and garden in the wilderness with Grant Dowdell. Karen’s background as a biologist and expertise in regards to all things to do with composting (including herself) has contributed greatly to the local food movement and regional agrarianism. 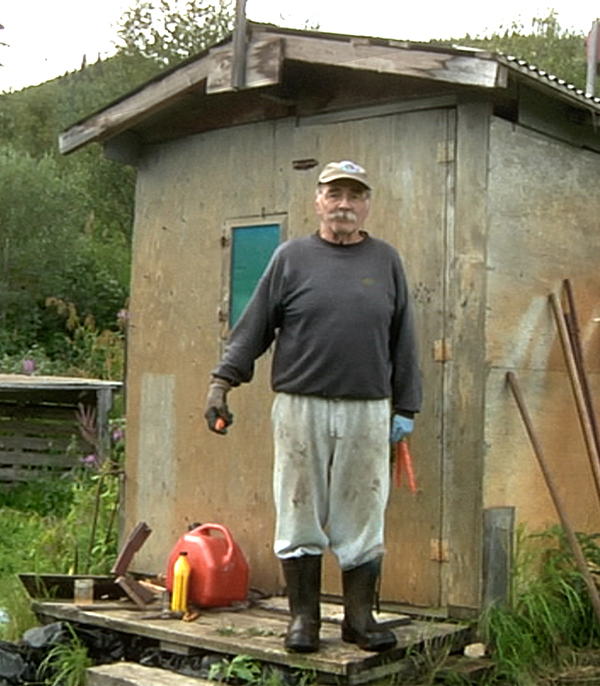 Gerry was born and raised in Rossland, BC where, from a young age he learned to live off the land, both from what the wilderness could provide and from market gardening. Gerry said that his upbringing was a bit “hardscrabble”, due to the times, and being from a working class family. He spent his late teens and twenties serving his country as part of the Canadian Forces Royal 22nd Regiment, with stints in West Germany during the Cold War and at home during the FLQ crisis. Gerry left the army, having attained the rank of Captain, and moved to the Yukon in the Late 1960’s. Gerry quickly immersed himself in the Yukon lifestyle becoming a competition dog-musher, a log builder, trapper, fisher, and miner. Gerry and his family lived a subsistence life on a small farm on the Yukon River at Thistle Creek, raising their children and supplementing their income through fishing, trapping and other seasonal work. After a series of devastating floods, and with fewer and fewer people living on the land and the river, Gerry and Jan decide to move the family to Dawson City in 1988.

Although they often visited the homestead for short periods of time they never moved back to Thistle. Gerry’s later life was filled with commercial fishing and playing an increasing role on boards, and at the negotiation tables, establishing conservation and management agreements and policies that would preserve the rich natural spaces and resources he passionately engaged with throughout his life.
Gerry had deep respect and admiration for the First Nations people of the Yukon, and he was ever diligent to ensure that their interests and history of stewardship and respect for the land were foundational to his conservation efforts.
Gerry passed away in 2019, but the legacy of his humour, commitment, wisdom and compassion will live on through the many conservation projects he initiated and championed throughout his life.

“Say not in grief ‘he is no more’ but in thankfulness that he was.” - Hebrew Proverb 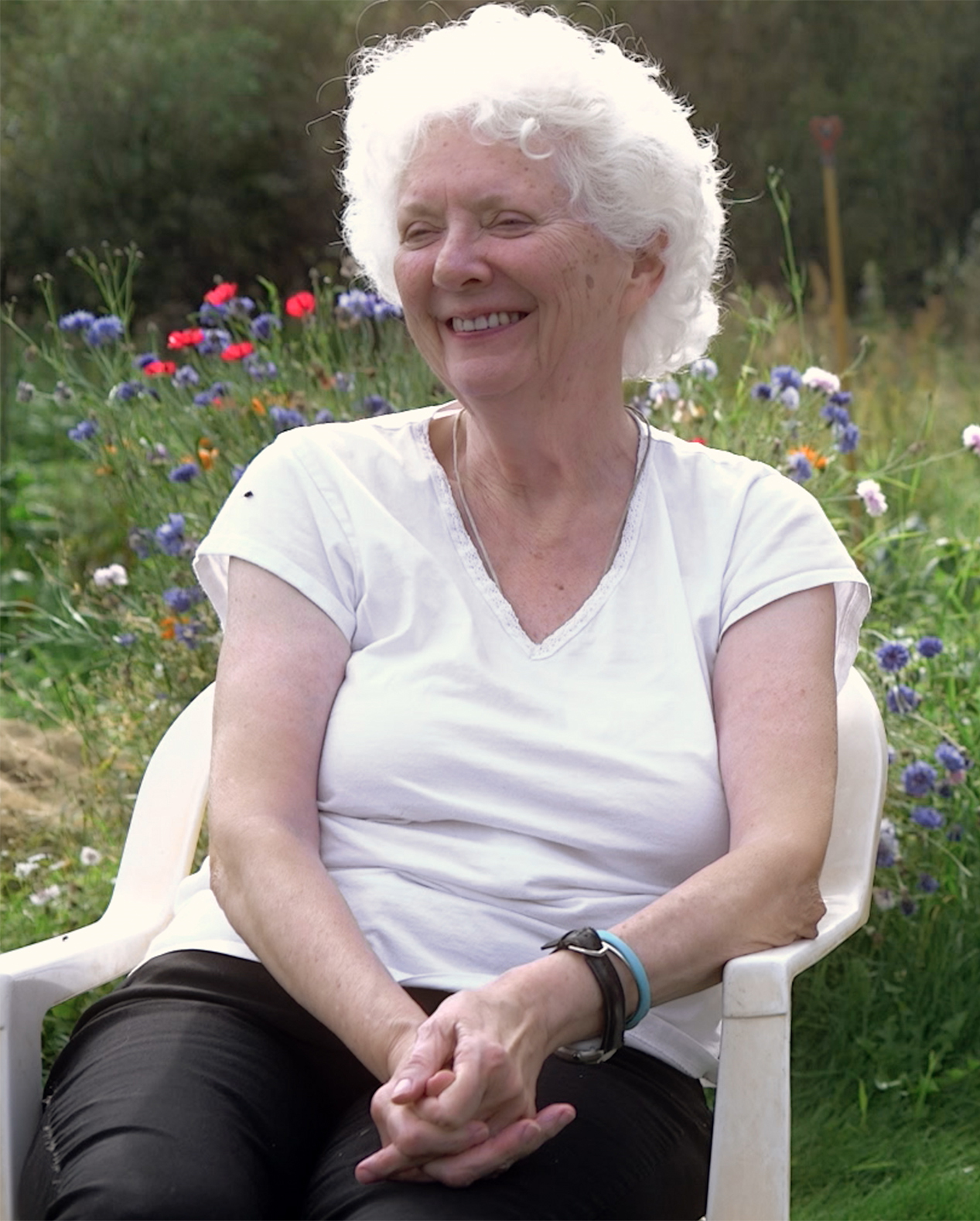 Jan was born and raised in Yonkers, New York and had little experience in nature before heading to Alaska for some adventure and to start a new life. One fateful day, during a stopover in a campground in Whitehorse, her little dog ended up antagonizing a large but affable dog in a neighboring campsite. Upon it ending up in the gentle grip of the larger dog’s mouth, Jan rescued her dog and struck up a friendly conversation with the Alpha dog’s owner, Gerry Couture. One conversation lead to another and she never ever made it to Alaska.

After that day Gerry and Jan started a life of adventure and larger than life exploits that saw Jan capably and willingly becoming the epitome of a stolid bush woman. Never one to shy away from adversity or a challenge, Jan didn’t hesitate to learn all there was to living an “off-grid” life - raising and schooling three children; protecting her family, dogs farm and livestock from bears and wolves; hunting and butchering moose; fishing for salmon; managing dog teams; growing a large garden and putting food away to survive the long harsh winters. Jan lived her life with gusto and aplomb and her time in the bush was deeply cherished. To this day, despite suffering from advanced Alzheimer’s, she never hesitates to speak honestly and openly about the hardships and highlights of her and Gerry’s time at Thistle Creek.

Jan’s willingness to explore and share her memories, despite the challenges it presented, during the five years of filming Sovereign Soil, are an inspiration to the entire team who worked on the film. 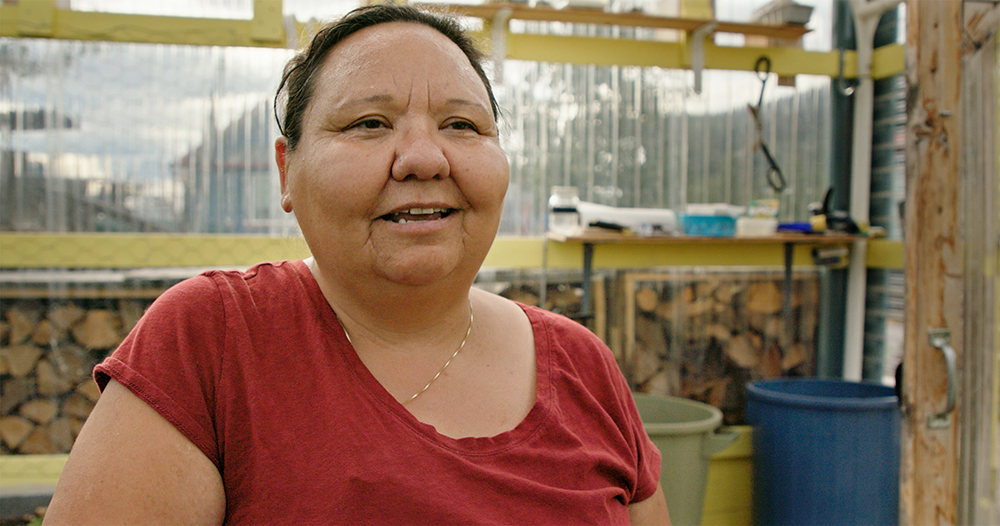 Jackie Olson is a Tr’ondek citizen, and proud Dawsonite, who embraces traditional northern Athabaskan art practices. Jackie is a forward thinking person, a dreamer, planner, entrepreneur and an advocate for arts, culture and the land. Watching her family living on the land was the most valuable lessons she learned growing up, these experiences, along with the stories of her ancestors and their culture, have shaped her as an artist, businessperson, activist and community builder. 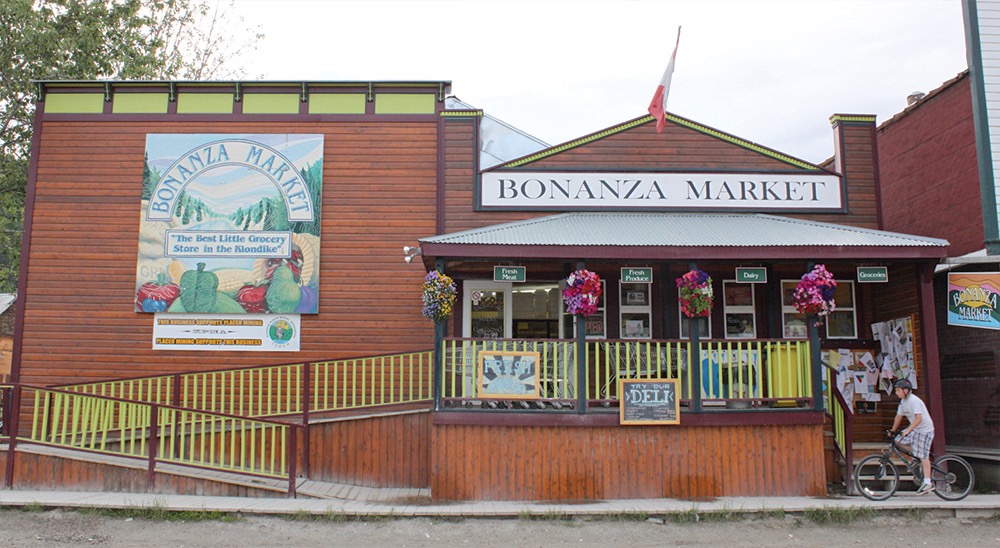 Paul Derry is a Master Butcher originally from England, and is the proud owner of Bonanza Market, which plays a key role in addressing food security in the Klondike region. Paul is an admired member of the local business community who’s volunteer work for and sponsorship of not for profit and NGO organizations has left an indelible mark on Dawson City. While by no means intending to leave the community, Paul is taking stock of his life and has put his business up for sale so he can enjoy his retirement “above ground”.

"Who is The TH Farm" TH Farm is located at KM 699 on the N. Klondike Hwy just 14 km southeast of Dawson City, Yukon, nestled on the banks of the Klondike River. Once the centre of the Gold Rush, now the site is at the heart of a bold new project to help with the revival of northern farming, improve food security in the North, and develop the only First Nations working farm north of the 60th parallel in Canada. Only 2-4 percent of the food consumed in the Yukon is grown in the territory. Yet TH Farm sits on a prime location to flourish. Dawson City hosts some of the best growing conditions around. The land is rich with fertile topsoil, since the locale evaded glacial erosion over geological eras. With all that in mind, the Tr’ondëk Hwëch’in set out to establish a sustainable, local supply of organic food that provides fresh, healthy meals and benefits the land.